At the movies, Bond was back in Casino Royale while Tom Hanks broke The Da Vinci Code.

And in Miami, at the WAEA Annual Conference & Exhibition, Bluebox Avionics set out its stall for the very first time.

In the decade since then, Bluebox has grown and diversified its range of IFE solutions to serve dozens of airlines worldwide, and always stayed true to its one core vision: to help the aviation market keep pace with the lightning-fast evolution of consumer digital technology and the customer expectations it raises.

Things were different at Bluebox from the start, as the founding team had no background in IFE systems at all.

It brought together aviation IT specialists and CSP veterans with no preconceptions about how content could or should be delivered, but sharing the conviction that the end user experience mattered most; also that the really exciting UX stuff then was happening down on the ground, not up in the air.

Providers of simple media players were already active, but none saw the potential Bluebox did in the emerging UMPC (ultra-mobile PC) devices that supported sophisticated games and connectivity features as well as the standard movies and music.

“Now we call them tablets – or more usually iPads – and therein lays a story.”

They were exploring ways to build their own high-quality, big-screen device when they heard the first whispers about a new kind of Apple device on its way.

When the iPad emerged in 2010 as a fully formed thing of beauty and supreme performance, they readily embraced it and an exciting new chapter began for Bluebox Avionics.

Bluebox worked closely with Apple and with Hollywood to protect early window movie files and make the first Bluebox Ai iteration the best, most secure – and ultimately the most popular – portable platform in the IFE market. 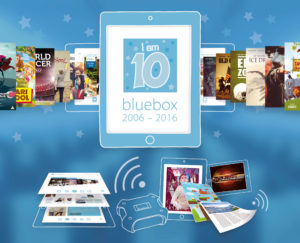 The new App Store games and superb iPad reader were bonuses that gave Ai even more of an edge over its competition, portable or fitted.

“The immediate success of Bluebox Ai gave us the platform and resources we needed to innovate more IFE tech products”, says Brown.

“We were right there in the earliest days of wireless, and again our thinking was around passenger needs as much as airlines.

“They wanted the latest movies that WiFi alone cannot provide, so we began looking at how our solutions could interface to optimise cost and weight efficiencies but still give the customer what the customer wants.”

Hence Bluebox Hybrid: any approved WiFi streaming system (including of course the Bluebox wiFE solution) plus EWC-enabled iPads, delivering a flexible, low cost but complete entertainment service onboard, with no fitted screens or cabin-wide wiring required.

Following on from this is the latest innovation, Walk-on wiFE which simplifies the proposition even more by enabling airlines to deploy Bluebox Hybrid without any installation or STC costs.

‘Bluebox Wow’ makes its APEX debut in Singapore in October, exactly 10 years after Bluebox tested the waters with the very first off-the-shelf consumer tech product optimized for the airline market.

In a way, Wow is simply more of the same – it’s just that the 2016 technology is so very much more powerful than it was back then.

And so too is the sky-high passenger expectation that still inspires the now veteran team at Bluebox Avionics.

2017 ushers in new era for Bluebox Avionics and AviIT Ltd