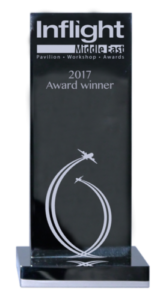 “Wow! And that pun is definitely intended!” said David Brown, Bluebox’s Business Development Director who was on hand in Dubai to accept the award. “In 2014, our Bluebox Ai iPad-based IFE platform won an Inflight Award in the category ‘Best Handheld IFE System’ so to say we’re extremely pleased and proud that our continued innovation in IFE has been recognised once again by the industry today would be an understatement.”

The Inflight Awards celebrate major successes within the IFEC and cabin technology sectors. Each of the eight categories is judged by an independent panel of industry experts, who aim to honour the superb technical creativity produced by the industry over the past 12 months.

“Leveraging low-powered Internet of Things technology, Bluebox Wow follows in the footsteps of our ground-breaking iPad-based Bluebox Ai and Hybrid solutions, bringing fun and engaging IFE to routes and aircraft for which traditional IFE systems would be cost-prohibitive,” added Brown. “We recently restructured the company to allow us to further increase the pace of our innovation, both in our products and how we service the market. We are delighted that this award recognises the innovation in Bluebox Wow. There’s much more to come.”