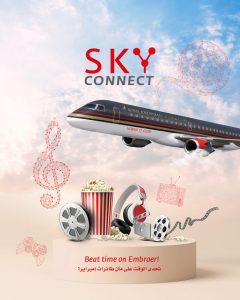 Royal Jordanian, Jordan’s national flag carrier, has expanded their “SkyConnect” wireless in-flight entertainment (W-IFE) service to its Embraer E175 and E195 aircraft. Originally launched in 2019 with a deployment of Bluebox Wow on its Airbus A319 and A320 aircraft, the expansion occurred in conjunction with several enhancements from Bluebox, through which Royal Jordanian has received upgraded Bluebox Wow boxes across the fleet, a refresh to the passenger interface, and conversion to app-free DRM content delivery, which removed a previous requirement for passengers to download an app prior to flights in order to access “SkyConnect” on board.

Given the flexible route pattern served by Royal Jordanian’s fleet, with some aircraft flying a mix of long- and short-haul routes, Bluebox has also introduced new functionality to the crew management tool, giving RJ cabin crew the ability to select different content sets, depending on the flight length. Restricting the content provided on short-haul flights to more appropriate short-form content (i.e. no long movies) will help the airline save content licencing costs.

Royal Jordanian Vice Chairman & CEO, Samer Majali said: “The addition of Bluebox’s wireless IFE solution to our Airbus fleet proved very quickly to be a valuable service enhancement enjoyed by our passengers, and so we wanted to expand this to our passengers flying on our Embraer aircraft as well – ensuring that wherever our passengers are flying they have access to our “SkyConnect” service. The flexibility of Bluebox Wow – and the excellent support we’ve had from Bluebox – has helped us ensure that as we emerge from the pandemic, our passengers will return to a rich in-flight experience and we’re making the most effective use of W-IFE on board.”

“When we first deployed Bluebox Wow on Royal Jordanian’s Airbus aircraft, we’d said it was a natural fit,” said Kevin Clark, CEO, Bluebox. “The fact that we’ve now extended the service to RJ’s Embraer fleet flying shorter routes demonstrates the flexibility of Bluebox Wow – and the ability of our team – to serve different requirements and to continually enhance the value of our solution for our customers.”

Bluebox Wow provides wireless content streamed to passenger devices in any aircraft cabin, including a wide range of film, TV, audio, games, and other digital content.  With a remarkably low cost of ownership, Bluebox Wow is a discrete, portable, lunchbox-sized unit stowed securely in overhead bins.

Being a leading carrier in the region, RJ’s vision is to be the Airline of Choice connecting Jordan and the Levant with the world. Back in 1963, RJ was established as the national air carrier of Jordan.

From its hub at Queen Alia International Airport, RJ runs its fleet to reach worldwide destinations providing an extensive travel network for its guests via Amman to Europe, the US and Canada and North Africa. Through its 13 international airline partners in the oneworld alliance, RJ offers a network of over 1,000 airports in 170 countries.

Any trademark used or referred to in this press release remains at all times the property of its respective owner(s).