In the News: “Bluebox on enabling airlines to go app-free for free with wireless IFE” – Runway Girl Network

In the News: “Bluebox on enabling airlines to go app-free for free with wireless IFE” – Runway Girl Network

Home  |  Featured  |  In the News: “Bluebox on enabling airlines to go app-free for free with wireless IFE” – Runway Girl Network

Going App-Free for W-IFE – a kind gesture or core offering?

Runway Girl Network founder and editor Mary Kirby examines the significance of app-free wireless IFE, particularly the removal of what is a friction point for passengers – the requirement to download an app to enable access to DRM encrypted IFE content on personal devices.

The article highlights Bluebox customer Vistara’s roll out of app-free DRM access this year, announced in conjunction with the Indian airline’s 1st anniversary of their “Vistara World” IFE service which is delivered on Bluebox Wow.

Bluebox’s David Brown is quoted in the article saying: “It’s so important because [Vistara] is a full-service airline. And like most airlines, it is really hard to convince people to download the app. So, they believe it will increase the take-up rate enormously.”

So important is reducing friction to W-IFE access that Bluebox is offering this functionality as an upgrade at no extra charge to Bluebox Wow customers currently using apps to deliver DRM content.

A “remarkably kind gesture” as Kirby calls it?

Not really, says Brown: “That’s the thing that we are known for is the extra support. It defines the kind of model we’ve got – a rental model – and as we add in features like this, then you will get it … because it’s core.” 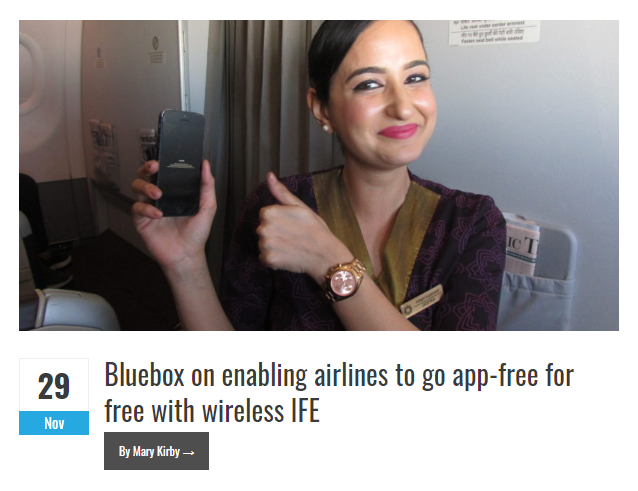